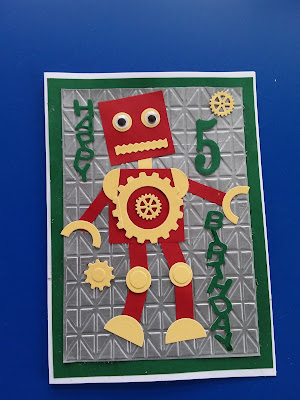 And my desk, untouched for four days after I made some cards similar to the ones Shaz Silverwolfwas sharing, but not as good as hers. 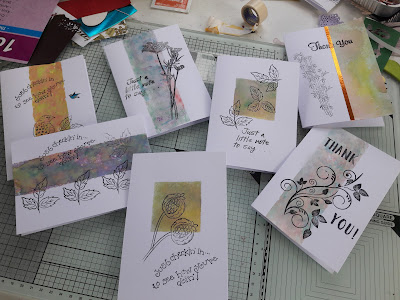 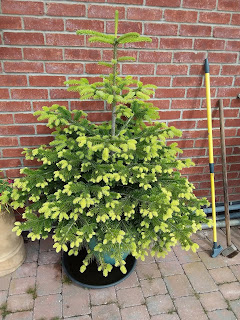 Do go and visit desk Magister Julia at her stamping ground to check out more crafty desks
And this is where I guiltily confess that I am unlikely to be able to do much visiting today as I have a lot of plants to put in the garden, and my sewing desk is loaded with a pile of scrubs bags I promised to deliver tomorrow and they are not finished because I have been helping hubby sort out windows for the new bathroom !! So I will be digging and sewing today, and not snooping on your desks!
See you all Thursday, thanks for dropping in
Chris
Posted by Mrs.D at 23:27 23 comments:

It's Wednesday again!! They keep galloping around, and I can't keep up. First of all, I need to apologise to all those lovelies who commented on my page last week, that I didn't get round to many desks, somehow every time I tried to get back to the computer, Sir required my muscles or a hand or a brain!!! to help him with drains, or ordering stuff for the new bathroom. The plumber is  not coming to install everything until July 16th but my man will be demolishing the utility room weeks before if I am not alert to stop him.
So my desk 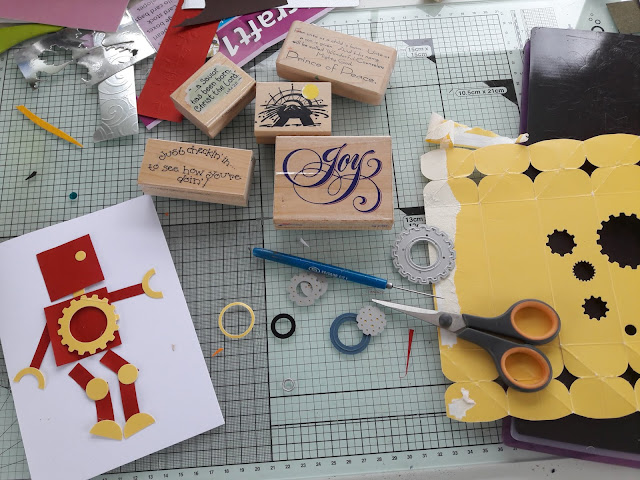 There is the beginning of a robot card for a soon to be 5 great nephew, and some Christmas stamps from Julia, and various bits of detritus left from previous card making.
Last week I shared that I had to make a card for another great nephew and lacked ideas, I cheated, rang my sister who said that during lockdown young Carl had enjoyed playing chess against his dad, rather him than me, I think his dad would have check mated me in about 3 moves. I am sure I took a picture of it before I put the card in the post, but can't find it on either my phone or my tablet .
So why am I blathering on here, all part of an amazing crafty desk share hosted by the wonderful Julia. She has been hosting it for eleven years and more, so well worth a visit.
That's all for me today, bless you for visiting
Chris
Posted by Mrs.D at 22:59 20 comments:

Good morning and welcome to my WOYWW post. For those who don't know what WOYWW is, nip over to Julia's  where all will be revealed.
So WOYWW is about our desks, and frankly I have spent so little time in the tower in the last couple of weeks, I could post you a desk view from my last post, so instead a finished UFO 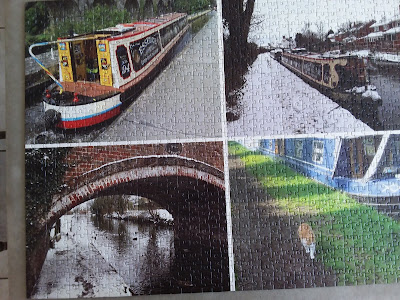 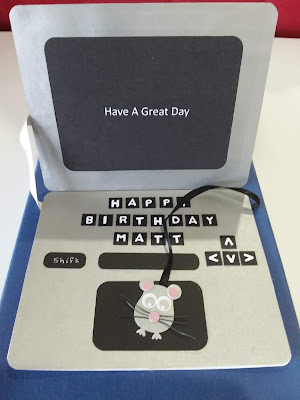 Idea lifted unashamedly from Pinterest,  which sadly does not seem to be offer suitable inspiration for  this week's urgent task, which is to produce a birthday card for a 10 year old great nephew.  Boys are alien creature, I was one of four girls, had two of my own, and just don't understand boys, especially boys who don't seem to have any passionate interest in anything.
So that's all from me this week, thank you for dropping in,
Bless you
Chris
Posted by Mrs.D at 07:54 19 comments:

So the 11th anniversary has arrived, but sadly we are no nearer to each other to celebrate than we are any other day of the year, however our host Julia still needs to be applauded. Well done for leading us thus far and here's to you, and maybe a crop in the autumn.
So instead of a crop and ATCs we were challenging to finish some UFOs, and last week I shared some cards that I had dragged out of the UFO box.
Some achieved the status of finished cards. 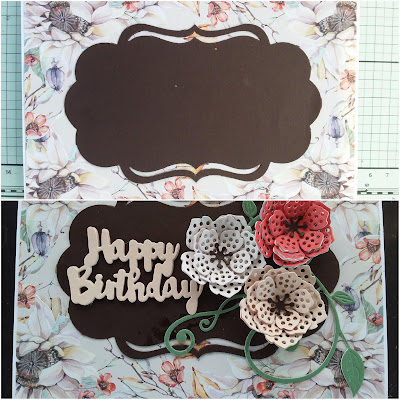 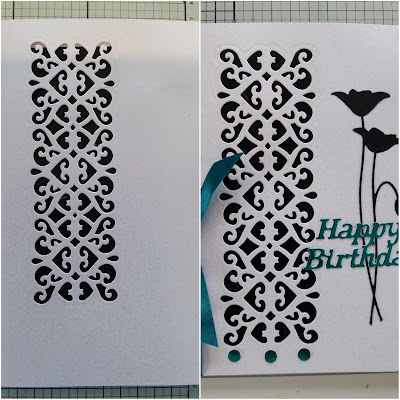 So the first three were fairly simple to finish, 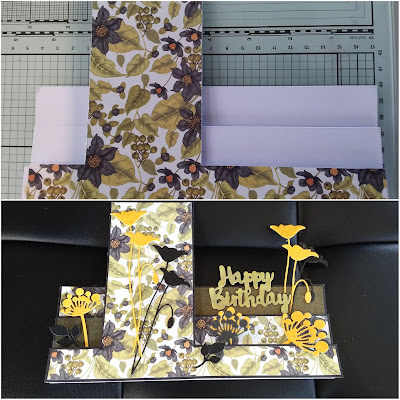 Except, I'm still not certain about the colours on this, although it does look much better in daylight than digital medium. 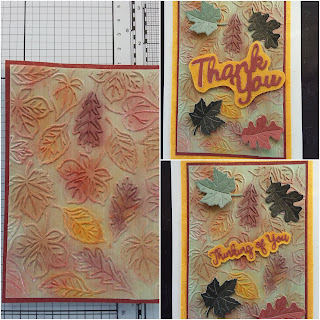 This one was fairly simple to do something with, although I really wanted
"Thinking of  you" to be the sentiment,  it looks rather small and insignificant on there so I also made the "Thank you" sentiment,  and will decide when/if I need to use the card. (Neither is attached)
Of the other three, 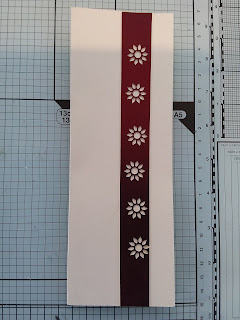 This one went in the bin. When I started trying to do something with it I found that the strip was not on straight and my attempt at removal destroyed it all.
Will probably try a similar starting layout at some time. 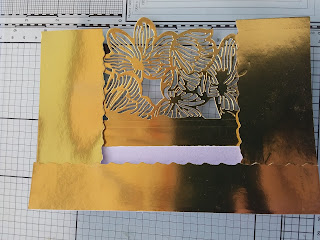 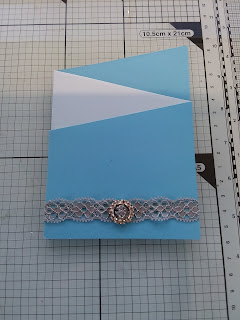 And this one I am still experimenting with,  here on my desk. 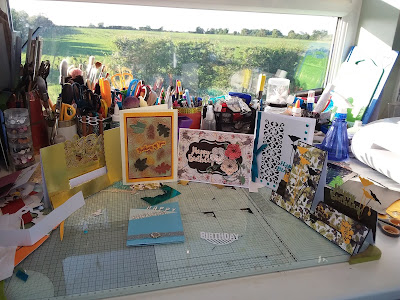 You can see the other finished cards here too. 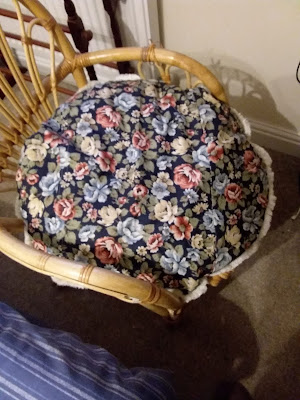 And a completely different UFO I finally finished. This chair sat in my Dad's study for many years, and when  he died nearly 19 years ago, I took possession of it. Sadly the cushion cover disintegrated about 6 weeks ago, and I started working on it and finding it was fiddly undoing the fringe from the remaining rags, it got chucked on a pile and left, but Margaret encouraged me to finish it, so I now have a comfy chair at my computer again. 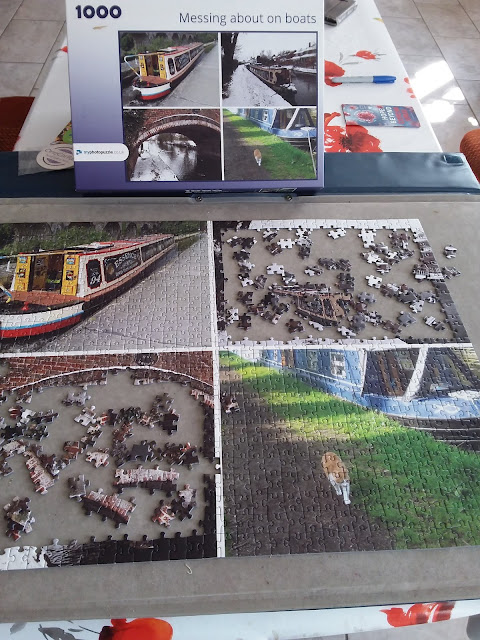 This sadly was a UFO that did not get finished, but it will do. This jigsaw is four pictures taken from my Facebook page by my daughter to make puzzle, 1 picture of our first boat, 2 of the second one and a snowy picture under a  canal bridge. 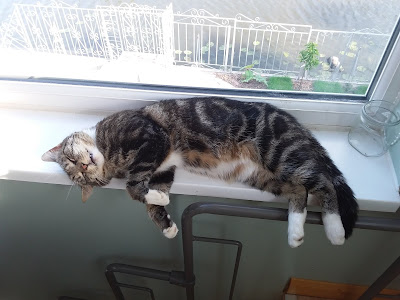 While I have been working this week, some of the time I was in the tower, this young man was keeping me company,sometimes sitting on my chair, and sometimes, if I get to the chair first, he sits on the windowsill absorbing the sun, I took this picture on Monday afternoon, went downstairs to my sewing machine and was suddenly very surprised to hear a 'Bonk, bonk, bonk' on the stairs behind me, and can only assumed he rolled over and fell off the windowsill and bounced down the stairs. Fortunately no broken bones, but he was a bit subdued for a few hours.
And finally a picture of the canal in the evening and some amazing anemones from my garden, they just keep on flowering and looking beautiful. 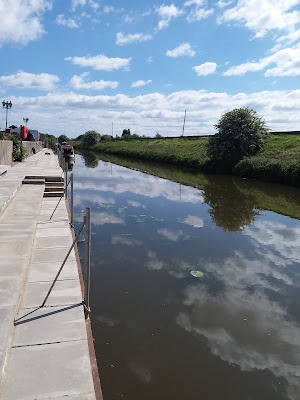 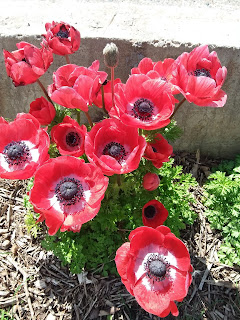 Well, this has been a very picture heavy post, so I better close before Julia decides to ban me in future.
Happy WOYWW anniversary
Chris
Posted by Mrs.D at 06:23 32 comments:

So we aren't having an ATC swap for 11th anniversary of WOYWW. (if you don't know what WOYWW is, visit Madame Julia at her Stamping Ground , where you can find links lots more desks to peruse.)
We are finishing UFOs! That's Unfinished objects for the uninitiated, or as a friend used to call them, unfinished symphonies, which is a term I prefer
Well I have plenty of those in this box. Including 20 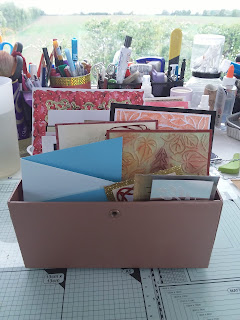 part done ATCs, because with lockdown I thought I would be all efficient and get them done early, instead of rushing them at the last minute! Maybe they will do for next year!
My usual reason for not finishing cards is because I get so far and then run out of ideas, so between now and next week, I have to find those elusive ideas and finish
them, I hope.
So I dug in the box and selected seven I think I might manage to conjure up inspiration to complete, for next week. 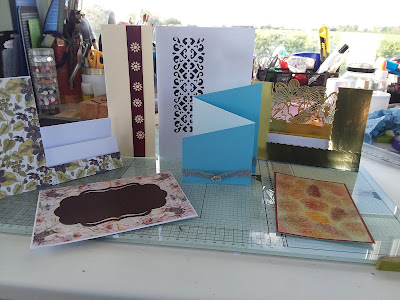 So here they are, 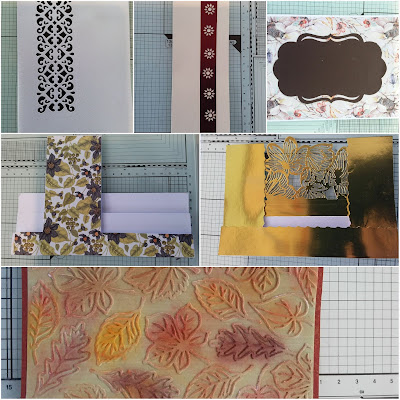 I'll show you next week how I got on.
Bless you all for visiting,  have a great day
Chris
Posted by Mrs.D at 08:00 19 comments:

Hi lovelies,
How is everyone coping with 'house arrest'?
This was my desk yesterday afternoon! I finished all the Easter cards and thought I would completely clear everything before sorting drawers and tackling a Space/Star wars themed 50th birthday card, anyone gone any ideas? 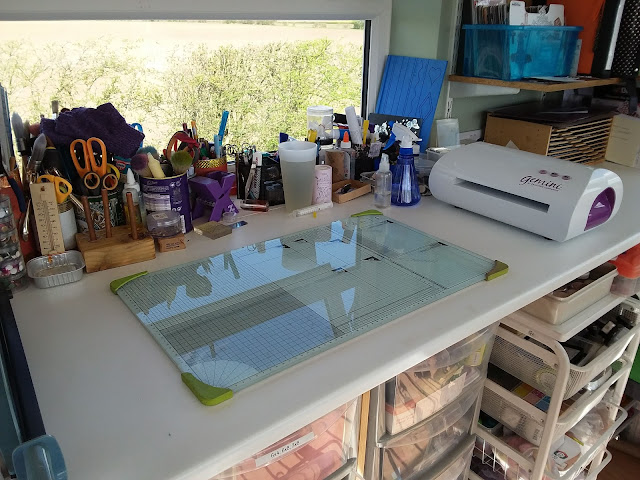 And these are all the Easter cards I made, I don't usually send them, but somehow I felt it was appropriate this year. When not making cards, mending, gardening etc, I have found time for permitted exercise,  dodging the crowds!  this is probably 400 yards from home, across the ploughed field to the left. 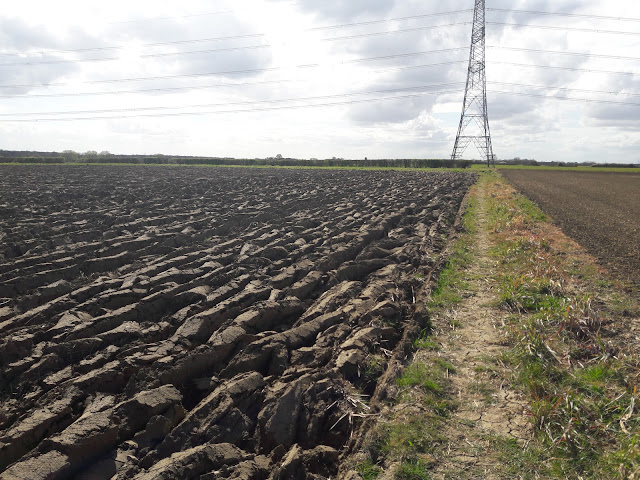 You are receiving this exciting opportunity to read my rubbish due to the wonderful hosting of  Madame Julia  , do go and visit to see more craft filled blogs.
Thank you for reading my drivel and I will try to respond to your comments.
Have a good day and keep sane in these difficult times.
Chris 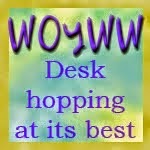